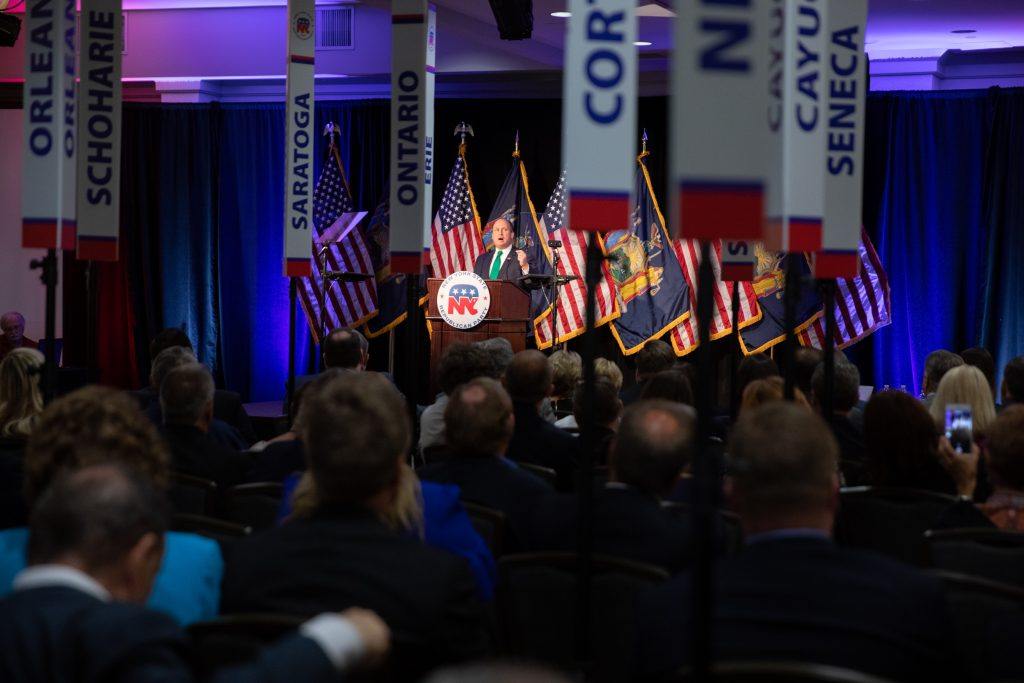 NYGOP Chairman Langworthy: We are Putting Together the Strongest Statewide Ticket Since 1994 That Will Restore Opportunity, Safety & Common Sense to New York

“This convention will put a huge spotlight on how we plan to replicate Nassau’s victories statewide.”

New York–January 12th…New York Republican Chairman Nick Langworthy today announced he has selected the Nassau Republican Party as its host for the 2022 statewide nominating convention that will be held February 28th-March 1st.

Republican county chairs, committee members and grassroots activists from across the state will gather at the Garden City Hotel for the purposes of nominating candidates for governor, lieutenant governor, attorney general, and U.S. Senate. In addition to conducting official party business, the two-day affair will also feature social gatherings,  presentations led by the Nassau GOP host committee and remarks from local elected officials.

“There is incredible energy and enthusiasm for this year’s convention, where we will officially kick off the 2022 election cycle and our mission to save New York State,” said New York Republican Chairman Nick Langworthy. “Everything we have been working toward has been to build the strongest ticket since 1994 that will restore opportunity, safety and common sense to our state. Voters are ready for change and we are going to offer them the solutions that will appeal to New Yorkers from every walk of life and political affiliation.”

Chairman Langworthy continued, “There is no better place to host our convention than Nassau County. They sent shockwaves around the state last November with their tremendous Republican victories and their historic success is proof that our Republican message is resonating with a broad swath of voters. I’m thrilled that Chairman Cairo has agreed to host us. He is the ultimate strategist who is a key part of our team helping to lead our candidates to victory. This convention will put a huge spotlight on how we plan to replicate Nassau’s victories statewide.”

“I want to thank Chairman Langworthy for selecting Long Island as the site for the state Republican Nominating Convention,” said Joseph G. Cairo, Jr., Chairman of the Nassau County Republican Committee.  “We enjoyed some great victories in 2021, sweeping the countywide elective offices, increasing our majority in the Nassau Legislature, taking back townwide offices and council seats in North Hempstead, dominating in the towns of Oyster Bay and Hempstead, as well as winning convincingly in the city of Glen Cove.  I think that Long Island is a great place to host the state convention.”